A vision for a better New York City

We can reimagine our largest public asset — our streets — in support of the needs of all New Yorkers.

NYC 25x25: A CHALLENGE TO NEW YORK CITY’S NEXT LEADERS TO GIVE STREETS BACK TO PEOPLE

Taken together, streets and sidewalks are New York City’s largest publicly owned space. Cars dominate that space. Despite the spatial abundance of 6,300 miles of asphalt and three million free parking spaces, New Yorkers’ everyday lives are relegated to narrow sidewalks and the margins of streets, where we are left to fight over the precious remaining scraps of our public space.

In the past two decades, elected officials have made little citywide progress in upending this wholesale car dominance — opting for disconnected and piecemeal improvements that fail to effectively manage our streets as a system of public spaces. For New Yorkers, the negative effects of a car-filled city remain. Asthma, heart disease, and preterm births rise with car pollution. Carbon emissions remain high and climate change threatens our future. New Yorkers risk life-altering injury and death crossing the street. Bus riders waste time on gridlocked streets. Burdensome commutes and a lack of transportation choices isolate communities from opportunity.

With a coalition of more than 80 unions, and economic, educational, environmental, disability rights, and public health organizations, Transportation Alternatives challenges New York City’s next leaders to end this vicious cycle by making a specific and substantial promise: to convert 25 percent of car space into space for people by 2025.

Today, New York City faces a budget shortfall, a crisis of racial injustice, rising inequality and traffic violence, the loss of millions of jobs and small businesses, and the ongoing threat of climate change. Our recovery can begin, in part, by reimagining our largest public asset — New York City’s 6,300 miles of streets and three million free parking spaces — in support of the needs of all New Yorkers.

Today, New York City faces a budget shortfall, a crisis of racial injustice, rising inequality and traffic violence, the loss of millions of jobs and small businesses, and the ongoing threat of climate change. Our recovery can begin, in part, by reimagining our largest public asset — New York City’s 6,300 miles of streets and three million free parking spaces — in support of the needs of all New Yorkers. 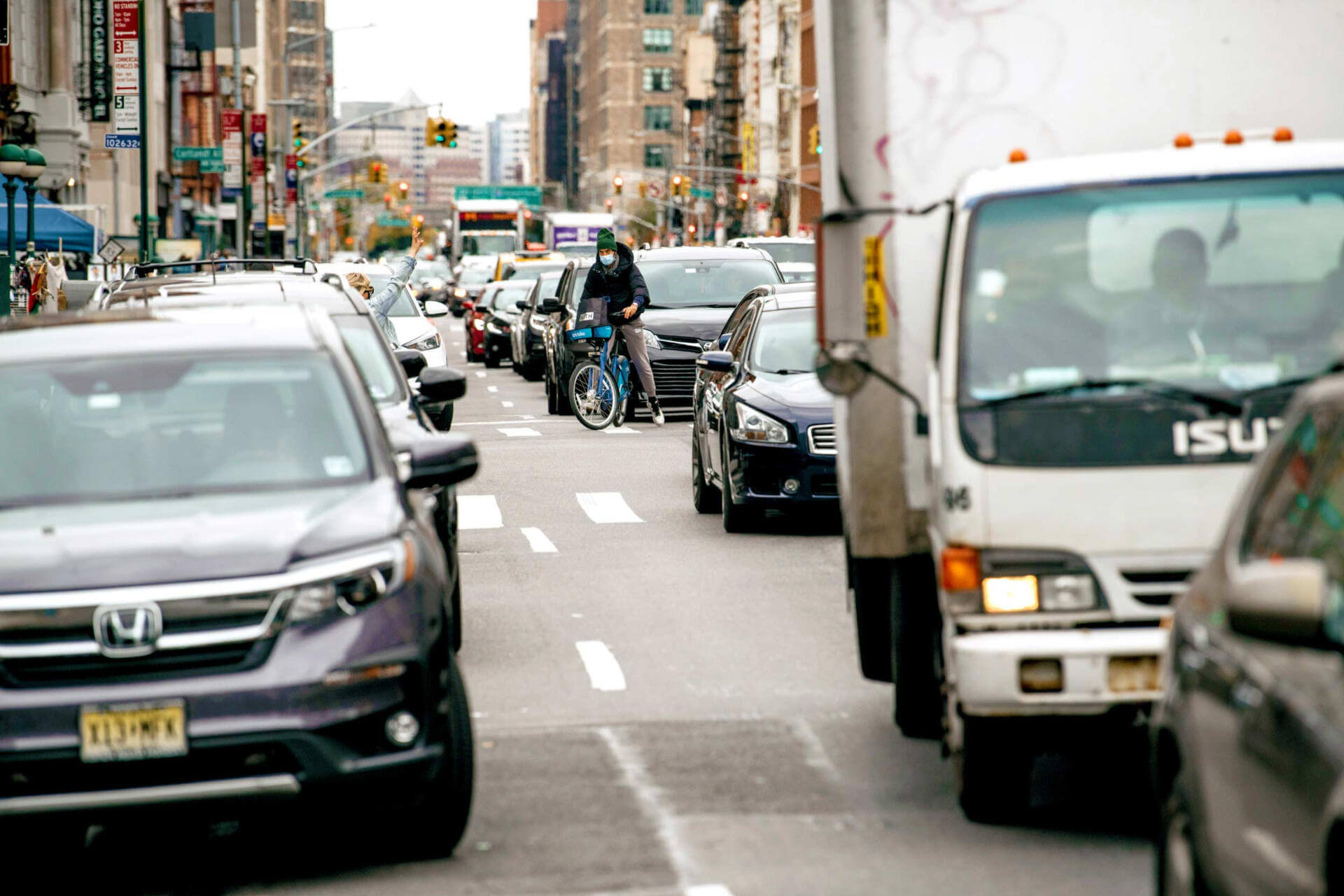 Streets are the single largest public asset in the City of New York — more than 6,300 miles of roadway crisscrossing at more than 39,000 intersections covering more than 120,000 city blocks. The lives of 8.6 million New Yorkers largely play out on the slim sidewalks that edge this massive network — the vast majority of everyday human activity relegated to the margins. 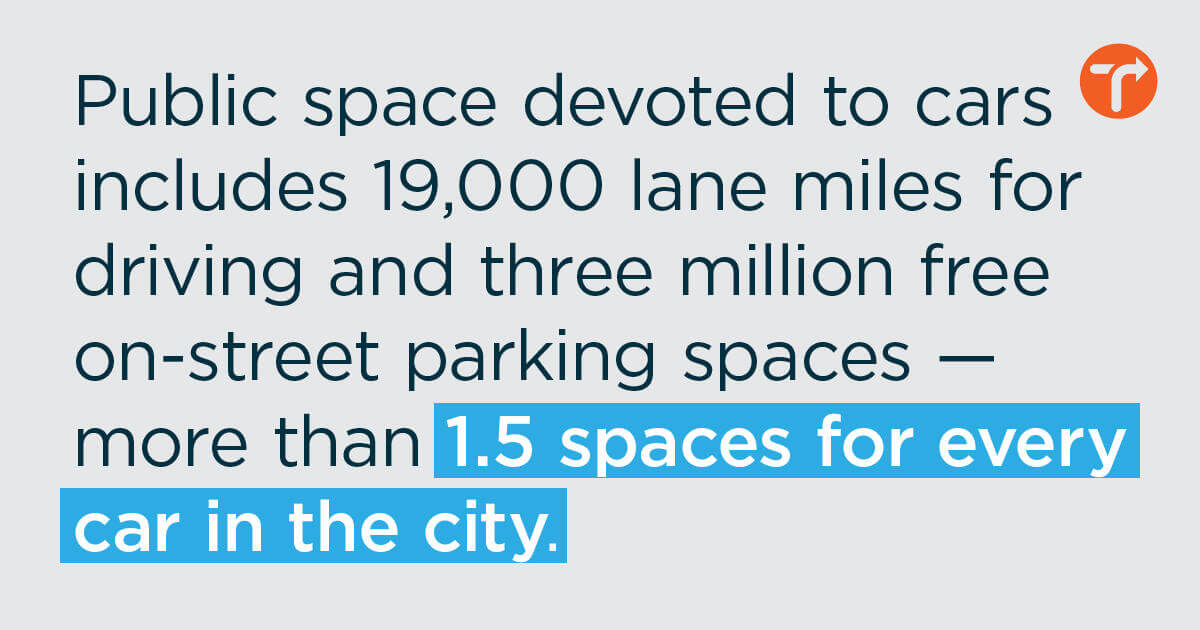 Today, though a minority of residents drive a car to work and a supermajority walks, takes public transit, or rides a bike, most of New York City’s streets are designed for a car-driving minority. An overwhelming 96 percent of New Yorkers walk to and from public transit, but public space devoted to the movement and storage of cars includes some 19,000 lane miles for driving and three million free on-street parking spaces — more than 1.5 spaces for every registered vehicle in the city — accounts for more than 75 percent of our shared streetscape. The remaining scraps of space are devoted to car-free bus lanes (0.02 percent), bike lanes (0.93 percent), and sidewalks (24 percent).

A better future will require a new management approach from city officials — one that sees streets as a system of public spaces designed to serve people and breaks from traditional thinking centered on moving and storing cars. By converting a sizable and significant portion of car space into space for people, New York City’s next leaders could be the first generation to address to inequitable distribution of space that has harmed New Yorkers for generations.

THE PROMISE OF FEWER CARS AND MORE SPACE

Following the public health and economic crises of 2020 and 2021, and the budget crisis facing the City of New York, and with congestion pricing and its predicted massive drop in car traffic to central Manhattan on the horizon, addressing these inequities is timely. It is also smart. Converting car space into expedited bus routes, safe bike routes, and expansive space for neighborhood life is both highly popular with New York City voters and proven to create more jobs and bring significant economic benefit for small businesses and city budgets alike.

Changing our streets starts with setting our priorities. If our streets are public space, then what is the best use of that space? Is it storing a few cars for free, or making space outside a local school for storytime? Is it prioritizing one commuter in a private car or 50 commuters on a public bus? Is it widening streets for oversized SUVs, or widening sidewalks so people with disabilities, older New Yorkers, and children can move about without fear? Is it double and triple parking, or planting trees to reduce pollution-induced asthma? City streets are rich with the potential to serve the public good and improve the lives of all New Yorkers — if only that space were not devoted to the movement and storage of cars owned by a minority of New Yorkers. Once we make the decision that public space should be prioritized by its best possible public use, the only logical next step is to reduce space for cars and increase space for people. A protected car-free bus lane can move more people with greater efficiency than a hundred cars ever could. A protected bike lane can provide more value to the economy, our health, and the environment than multiple lanes of traffic. Even a tiny bit of greenspace or a pair of benches is enough to clean the air or start a conversation, each a step to a higher quality of life for all New Yorkers. When the Covid-19 pandemic overtook New York, the City closed many streets to cars to make space for safe physical distancing and the reopening of small businesses. The lesson learned was that the status quo — public space long dominated by car traffic — was not the only way that streets could be. The rapid creation of Open Streets and outdoor dining showed that converting car-filled streets to better use can be done quickly and inexpensively and can deliver huge benefits to essential workers, small businesses, children, older adults, people with disabilities, low-income communities, communities of color, and central business districts.

These were not new ideas for New York City. From the pedestrianization of Times Square to the launch of the city’s first car-free busway on 14th Street, New York City knows how to reimagine streets. Each of these ideas was an individual success in terms of transportation efficiency, public safety, public health, and the local economy — proof that converting car space into space for people works. Now, future leaders of New York City must scale these successes, and use our streets as a pathway for New York City’s recovery.

The City of New York faces a daunting budgetary crisis. Recovery will require a new look at assets that have been historically misused and underutilized — like 6,300 miles of streets and three million free parking spaces — as potential tools to support our city. There is no question that our public space is inequitably distributed. Addressing this inequity will produce economic gains and cost reductions in public health, public safety, and the environment that will easily outweigh the initial investment. With the potential for revenue generation, job creation, and dramatic long-term cost reductions in health and infrastructure spending, converting car space into space for people is an opportunity that we cannot afford to miss.

Faced with the monumental challenges of economic recovery, mounting inequality, increasing traffic violence, climate change, and the potential for more pandemics on the horizon, it is time to make a fundamental shift in what purposes our public space serves, and ensure that the New York City of the future is built for people, not cars.