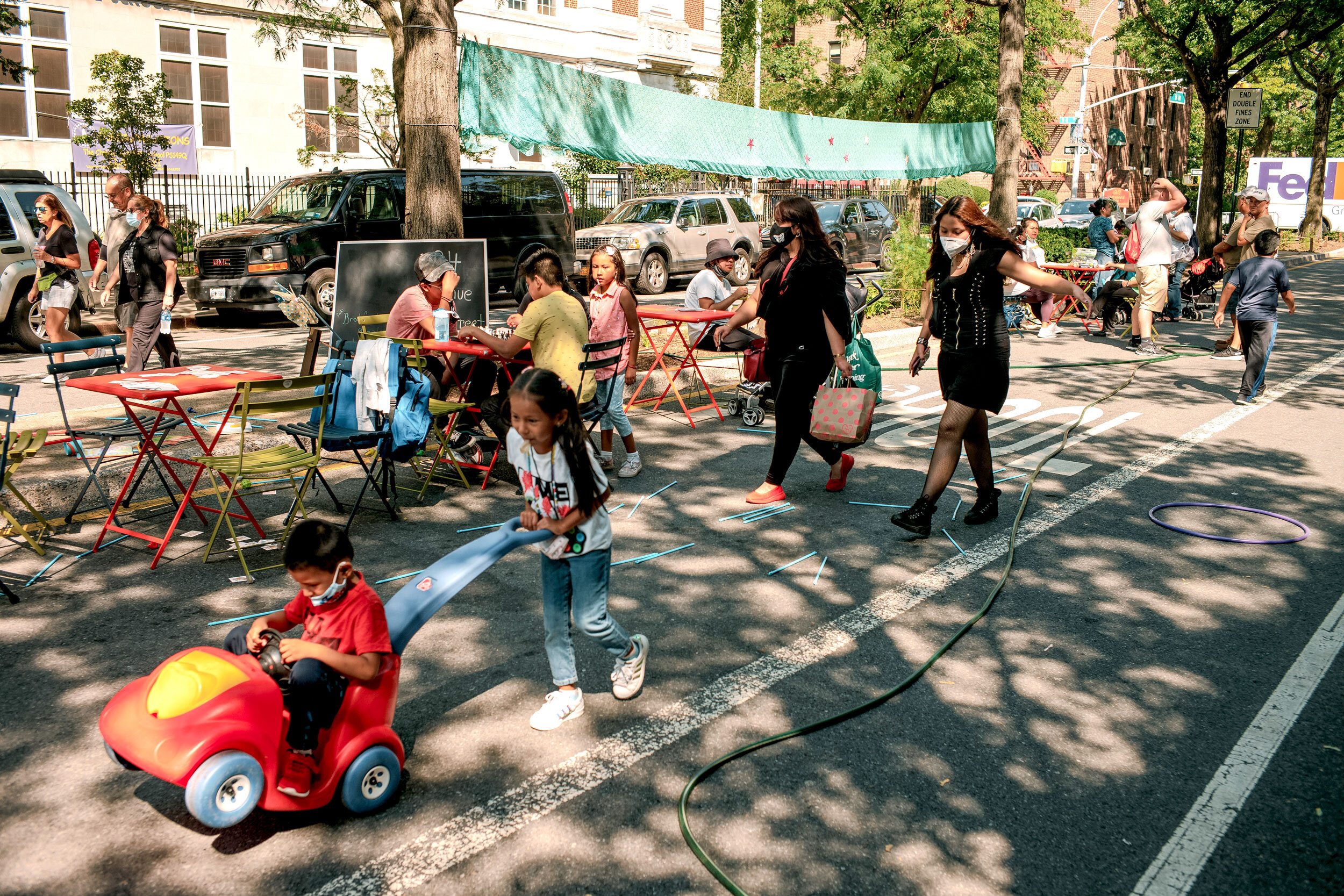 In the section of this report titled “What You Can Build: The Spatial Potential of City Streets,” TA hypothesizes new uses for 25 percent of current car parking and driving space. These calculations are based on a total of 19,000 lane-miles (as opposed to street miles, which disregards lanes) divided over a number of types of replacement infrastructure. For example, a one-mile-long street segment with three lanes of traffic would count as three lane miles. Information on the sources for replacement infrastructure follows.

Streets To calculate the citywide street area, TA used streets centerline data from the New York City Department of Information Technology and Telecommunications (DOITT). Street width was multiplied by length. For lane miles, 19,000, a number from the New York City Department of Transportation (DOT), was used when applicable. Of the total area covered by the streetscape (streets, sidewalks, and bicycle lanes), vehicle travel lanes make up 54.2 percent.

Sidewalks To calculate the street areas, TA used the streets centerline data from DOITT. Area of parks was included in the data and was subtracted from the total area of sidewalks. Of the total area covered by the streetscape (streets, sidewalks, and bicycle lanes), sidewalks make up 23.74 percent.

Bicycle Lanes TA used the NYC DOT’s New York City Bike Routes dataset to calculate the area of bike lanes. The width of class one bike lanes varies from 8 feet to 14 feet. Width of class two bike lanes varies from five feet to eight feet. For the purpose of area calculations, the average width for each class was used — that is, class one lanes were taken to be 11 feet wide and class two lanes were taken to be 6.5 feet wide. Data was sorted by classes to calculate area for each class in each region, which was then summed to calculate total area. Off-street bike lanes and greenways were removed. The 3.1 miles of bike lanes on pedestrian plazas and sidewalks were counted under bike lanes and subtracted from corresponding areas. Of the total area covered by the streetscape (streets, sidewalks, and bicycle lanes), bicycle lanes make up 0.93 percent.

Free On-Street Parking The number of free on-street parking spots is based on Jehiah Czebotar’s tracking since the release of a 2016 internal NYC DOT memo from then-Commissioner Polly Trottenberg’s testimony, which estimated 2.99 million parking spaces. Jehiah Czebotar has tracked and subtracted all parking space removals dating back to the memo’s study period. According to the City Comptroller, there are 85,000 metered parking spaces in New York City which was subtracted from total number of spaces, which totaled 2,989,413 at the time of this report’s publication in late February 2021. Of the total area covered by the streetscape (streets, sidewalks, and bicycle lanes), free on-street parking makes up 20.52 percent and paid on-street parking is an additional 0.6 percent.

Universal Daylighting The number of square feet needed for universal daylighting is based on a NYC DOT number, 162,000 street corners. The total area reclaimed was calculated by removing two standard parking spaces’ worth of area at each corner. Due to the fact that a very limited number of intersections in New York City are daylighted already — and those use only half the square footage recommended by the National Association of City Transportation Officials (NACTO) — and that some corners indicated would be needed, in our calculation, for bus bulbs, 15 percent was subtracted from the total. The remaining spots were multiplied by 180 square feet.

Public Utility Curb Reform The number of square feet needed at the curb for public utilities such as deliveries, for-hire vehicles, and trash contained is based on four parking spaces converted on each of New York City’s 120,000 blocks, totaling 720 square feet based on dimensions of 80 feet by nine feet.

Community-Driven Needs The number of square feet needed for community-driven needs is based on a proposal of two million square feet for pedestrian plazas combined with 200,000 parking spaces, or 36 million square feet, converted into parklets, trees, and greenery where needed most.

Space for Restaurants, Vendors, and Retail The number of square feet needed for arts and cultural venues, restaurant seating, street vendors, retail, and other uses to bolster economic recovery is based on 30,000 parking spaces, as well as the number of Open Restaurant permits during the program’s peak, with additional space added for non-restaurant seating uses.

Subway Station Parking The number of square feet needed to create economic hubs outside subway stations with expanded bus shelters, public bathrooms, benches, and bike parking to promote multimodal travel is based on reclaiming 100 parking spaces at each of the Metropolitan Transit Authority’s 472 stations.

Bus Bulbs The number of square feet needed to create bus bulbs to improve crosswalk safety was calculated by using NACTO’s recommendation of 300 square feet per bus bulb and multiplying by one-third of the total number of bus stops in New York City.

Number of New York City Parks Worth of Space Reclaimed The equivalence between converting 25 percent of current car space to a certain number of New York City parks (Staten Island Greenbelt, Central Park, Van Cortlandt Park, Flushing Meadows-Corona Park, and Prospect Park) was calculated by dividing the total reclaimed area by the number of acres per the New York City Department of Parks and rounding to the nearest whole number.

Metered Parking Revenue In Fiscal Year 2018, the City of New York collected $228 million in metered parking revenue. With only 85,000 metered parking spaces — less than three percent of all spaces — each meter averages $2,682.35 annually, or $7.35 a day. By expanding the number of metered parking spaces in commercial corridors by 780,000, and assuming very conservatively that each new meter would only collect 50 percent of current meter averages, the city would collect $1.07 billion annually in new revenue.

Information on the sources for data visualization in this report follows.

Meters for ¼ of Free Parking = $1 Billion in Revenue

One Lane of Gridlock = One Quicker Commute

Storage for One Car